There used to be just Boss Vic del Rosario of Viva Films and Robbie Tan of the now-defunct Seiko Films but there is now a third male producer who has started making noise during this time of pandemic. His name rings a bell since he had created waves during his prime especially in his inclusion in the 90s popular variety show That’s Entertainment of the great star mak 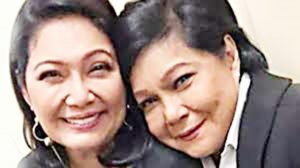 The name Joed Serrano started to become a household name when his first venture, “Anak ng Macho Dancer” hit it big at the tills. Due to its success, the megaproducer thought of coming up with more movies this time utilizing the big names in the industry. Thus, he started with the one and only superstar, Miss Nora Aunor, who this time shied away from her usual “api-apihan” roles. Ate Guy is now the “Kontrabida” as the title of the film suggests. She is joined by the Cannes Best Actress, Jaclyn Jose and a host of upcoming stars led by Ricky Gumera and Charles Nathan. The film directed by Adolfo Borinaga already wrapped up its last shooting day the other day.

The megaproducer immediately have a follow-up movie under his Godfather Productions. This time it will be starred by the Diamond Star, Miss Maricel Soriano. Known as showbiz’ most versatile actress because she can portray any role with ease from drama to comedy to action to horror, Marya already agreed to do the movie with the new acting find, Ricky Gumera and hopefully with Bidaman Ron Macapagal. This film which doesn’t have a working title yet would surely be another surefire hit what with the movie queen showing his sterling performance with the two new good looking and sensitive actors in an acting duel.

Aside from these two projects, Sir Joed will also be producing the return of the popular loveteam of the 90s, Sheryl Cruz and Romnick Sarmenta . This is also the comeback film of the megaproducer who, if memory serves me right, did his last film in the 90s yet. Another movie in the planning stage is an action film to be starred by two guapulis.

Even in this most difficult time, business continues with megaproducer Joed Serrano. Let us all support this producer with a heart.

56 thoughts on “FROM SUPERSTAR TO DIAMOND STAR”