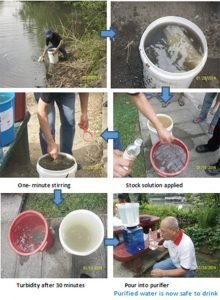 now King of Holland recommended in 2002 to use simple, indigenous, innovative and inexpensive method of water treatment to address the third world problem of drinking water. This is specifically included in the UN Millennium Development Goal (MDG) on water by 2015. According to DENR early this year, an estimated 19 million Filipinos do not have access to clean water. These are found in inhabited islands less than 1,000 hectares without groundwater as well as in far-flung places not reached by the services of the water districts and the Local Water Utilities Administration (LWUA).

This water treatment device is a miniaturized version of MWSS in Balara and similar treatment   plants   worldwide.   Weighing   an   average   of   eight   (8)   kilograms,   it   can   be transported to any part of the Philippines, including those hard to reach areas in small islands and isolated places. All the functions of the large water treatment plants are miniaturized and simplified so it could be operated by anyone without special skills. No electricity is needed. In   times   of   disasters,   it   can   treat   flood   water   or   any  low   salinity   turbid and biologically contaminated source to pota-ble. The water treatment devices are made of local materials abundant in the Philippines. Manu­facturing   the   minia-turized   water   treatment   devices   can   potentially   employ thousands of informal settlers. This can also be tied up with the building of mini lagoons that can store  run-off  water  needed during  the  dry  months.

The  miniaturized  watertreatment device could be used to treat stored run-off water to make it potable. Objective and advantage Unskilled   personnel   can   manufacture   the   miniaturized   water   treatment   devices. Therefore, if  to be built all over the Philippines, a multiplier-effect can result in suchundertaking   with   the   processing   and   man-ufacturing   of   raw   materials   needed   to assemble miniaturized water treatment devices. The clay pot or “banga” industry can berevived as well by modifying it with a miniaturized water treatment device sitting on top of it. Potable water stored in a clay pot tastes good as well as cold, as if refrigerated. The taste is much better compared to potable water stored in a plastic container.

He finished High School in Cebu City at nag-aral ng mechanical engineering sa Manila. He worked at the Wake Island Air Force Base Mid-Pacific in Hawaii, then at the Sultanate of Oman, then at Saudi Arabia and at the United Arab Emirates.