With the theme, “Apatnaput limang taon na Malasakit at Serbisyo”, the PPA looks back in time in its bid to further improve its services in order to give better care to the country.

PPA General Manager Jay Daniel R. Santiago explained that ‘Malasakit and Serbisyo’ will be the mantra of the PPA in the next 365 days with the end goal of providing care (malasakit) to the Filipino people through its port services (serbisyo). 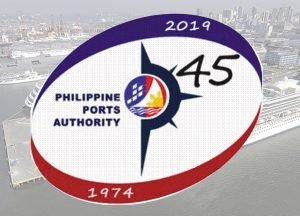 “For the past 45 years, the PPA is not only known as the port planner and port service provider but most especially a champion when it comes to extending care to the community,” Santiago said.

“These qualities have guided the agency for more than four decades and we have no reason to cease. In fact, we are even doubling our efforts through buil­ding better communities surrounding our ports,” Santiago explained.

“The efforts are not confined to port services alone, but it also include empowering our economically challenged Filipinos by bridging the gap in terms of food sustenance, healthcare and even up to housing,” Santiago added.

As of the moment, after allotting close to 5 hectares and some P1 billion to Baseco residents in February this year, the PPA is crafting several guidelines on how to duplicate the initiative to other areas even those areas without nearby ports.

The PPA is also looking at reducing the carbon footprint of all its ports by introducing the use of sustainable energy, equipment and products to complement the initiatives of the global sector.

PPA will likewise continue to pursue better partnership with the private sector to guarantee that port services are given at the highest quality possible particularly in ports with high concentration of people and cargoes.

“This are only some of the plans of the PPA that are in store for the Filipinos aside from our earlier accomplishments, particularly in the field of infrastructure in support of the Build-Build-Build initiative of the current administration,” Santiago said.

Earlier this week, the PPA said some 200 port projects have been completed in the first three years under the Duterte Administration. An additional 100 port projects are expected to be completed again at the end of the year.

The projects are aimed at trade facilitation and faster turnaround time of vessels, thus, resulting to lower cost and better purchasing power for the Filipinos.

The separation of the Philippines into many islands, particularly in the early part of the ‘baby boomer’ generation, hopping from one island to ano­ther was not as easy as 1, 2, 3.

However, with the establishment of the Philippine Ports Authority in 1974, through Presidential Decree No. 505, connec­ting the islands of Luzon, Visayas and Mindanao has steady improve through the years.

Let us go back to speci­fic periods of time in the last 45 years to show not only the evolution of the PPA to what it is now but also how it affected the lives of the Filipinos for the better.

1977 – the Philippines, through the PPA, started to come-up with long-range port development plans in order to further improve and render more effective use of ports.

1982 – a total of 114 ports nationwide have been transferred to the control of the PPA. This ports now comprise the entire PPA port system.

1987 – after taking away its corporate autonomy after the EDSA Revolution, the PPA regained its autonomy in 1987 to guarantee that all port projects are effectively implemented and that only port projects of viable markets are being carried out.

1989 – When PPA was first feted as the top performer among all GOCCs at that time in giving dividend to the National Coffers. Up to this time, PPA remains in the top10 of the ‘billionaires club’ of all GOCCs. In the last 2 years, the PPA is ave­raging remitted dividend of at least P3 billion. These amounts are vital in carrying out the socio-economic and healthcare program of the government.

1996 – Owing to the expertise of the PPA in planning and construction of ports, government has transferred the control of ports included in the Pan Philippine Highway or the first ever Ro-Ro node of the country, which was established during the Marcos Administration.

2001 – PPA, in partnership with the Visayan Forum Foundation, started to construct, establish and operate Half-way Houses in strategic ports as a first defense against human trafficking at ports. The operation of these houses have put the PPA on the world map after it was feted abroad by the World Bay Against Child Labor.

2007 – the PPA has transferred to its new corporate office along Bonifacio Drive in Manila. This has been the seat of power for the PPA for the past 12 years.

2011 – PPA has partnered with the Intellectual Property Rights Office in order to curb counterfeit and pirated goods passing through Philippine ports.

2013 – With the devastation brought about by a magnitude 7.1 earthquake in Bohol as well as the devastation of super typhoon Yolanda to the Samar and Leyte area, PPA since has prioritized port projects in the area in order to bring back the ports to its pre- earthquake and Yolanda conditions or even better. While the major ports in the area have been utilized as early as the next day after the so-called disasters, repairs have been ongoing until now.

PPA, THE PAST 3 YEARS

In each of the past 3 years, PPA dividend remitted to the government have been drastically increa­sing, posting the highest dividend remitted in 2018 with a whooping P3.5 billion compared to the figure posted in 2017 at P3.1 billion and 2016 at 1.8 billion.

PPA is likewise enjo­ying the highest growth percentage in terms of cargo volume passing through Philippine ports with 5.16% in the last three years, compared to the two immediate previous administrations with a growth rate percen­tage of 4.4% in 2010-2012 and a minus 6.6% for the 2004 to 2006 period.

The state-owned agency has likewise remained to sturdy foundation when it comes to financial condition as it continues to rake in billions of pesos as port revenues, growing at least P1.5 billion annually for the period in review.

Aside from the staggering dividend remitted to government, the second biggest achievement recorded by PPA in the last 3 years was the increases in cruise-tourism industry. Total tourist totaled 50,000 as of end 2018, an increase of more than a thousand fold compared to the last 5 years. PPA has likewise netted regular cruise-tourism calls that include stops in Manila, Boracay, Bohol and Currimao in Ilocos.

“The steady increases in our finances, cargo volume, shipcalls and passage, is a testament that PPA is able to meet the requirements and demands of the local and foreign shipping industry,” Santiago said. In terms of infrastructure, among the notable locally-funded projects that have been completed and are expected to bring better service and car for the Filipino people include:

“These ports are only some of the projects that have been completed. A sound infrastructure is one of the many ways to render service and care to the public. PPA is bent in further improving these infrastructure in the next couple of years,” Santiago added.

The PPA is also continuously building the competitiveness of PPA employees by giving equal opportunities to each employee for local and ­foreign scholarships. Among the courses offered include the UNCTAD Train for Trade program; the Modern Port Management; and the Public Management Development Program.

PPA is likewise not letting down on its Corporate Social Responsibilities. Aside from joining the usual clean-up drives along the Manila Bay in NCR and several coast towns and provinces nationwide, the PPA is likewise taking its CSR to a bigger scale.

Among the projects being continued are the building of Social Reform ports or missionary ports in order to connect the very far-flung areas of the country to the seat of economic activity; and the rehabilitation of ferry terminals along the Pasig River, being dubbed as PPA Legacy projects, in order to lure more passengers to use the Pasig River Ferry System. 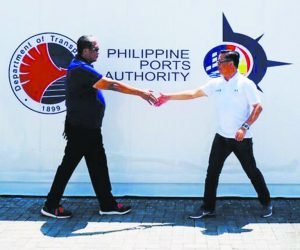 On a more personal approach, the PPA, during this year’s Father’s Day Cele­bration, a Malasakit Kit was distributed to all fathers at the port, passing through the ports or being at the port by accident as a tribute.

And lastly, the donation of some 5 hectare of lot to be distributed to informal settlers along the Manila Bay and some P1 billion as seed money for the construction of a residential building for the informal settlers.

“The PPA, along with the Department of Transportation, guarantee efficient and effective service, first to all port users and passengers and to community adjacent to all ports that PPA and DOTr are your partners toward a comfortable life,” Santiago ended.